Newspaperman and author Larry LaRue died on Nov. 6, 1017. He was a kind man with a great sense of humor and a way with words. 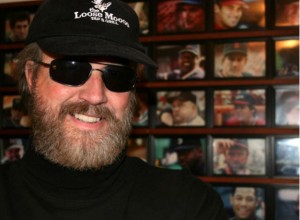 He is probably best known for his work as a sports editor, covering baseball for the Long Beach Press-Telegram and later the Tacoma News Tribune. He is survived by his wife, Marie; his daughter, Jessica; his grandson, Caleb; and his mother, Valerie Multon.

Newspapers were part of his life long before LaRue started working for them at age 18. His grandmother was a typesetter for a weekly in San Dimas, California, and he sat in her lap while she’d run an old lead-type machine. He was first published at 10, when a San Clemente newspaper ran his story on Pookie, his dog.He’s been writing ever since.

Five newspapers, a business journal and an entertainment magazine wrapped around brief careers as a window washer, bouncer, and private investigator. Always, he wrote.

There was a book on an American Capuchin priest who performed exorcisms in New York and Iowa, another on political cartoonists, a novel based on a news story he followed, and a book of major league baseball anecdotes. All wound up in a drawer or a closet.

Since 1976, there’s been another constant in his life – George Cunningham. As co-workers, backpackers, entrepreneurs, political opposites, writers, photographers and friends they have pursued projects and dreams together.

Reader Publishing Group may be the best yet for George and Carmela Cunningham, and LaRue was one of the first to leap on their backs.

A former columnist with the Tacoma News Tribune, you can read more about his adventures and misadventures at the following sites: