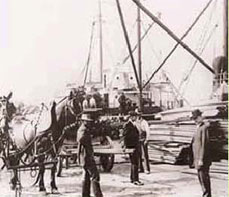 During the Civil War many of the stories from the battlefield were filed over a new-fangled device called the telegraph – which was subject to interruption if the lines went down either through accident or sabotage. So it was important to send out the most pertinent facts first, and then add the details.

If your story started out saying, “General Grant got up this morning, had a cup of coffee, smoked a cigar, and got ready for the battle,” and the telegraph lines went down, the folks in the newsrooms back in New York or Baltimore or Washington were very frustrated. So the reporter had to start out saying who won the battle, how many folks were killed, and when and where the action took place. Then, if the connection was still open, he could talk about what the General had for breakfast.

The inverted pyramid is still a good device. People are busy and with an inverted pyramid story they can read as much as they want, then skip the rest of the details when they are ready to move on. But sometimes in the olden days, when life moved much more slowly, the reporter would try to get so much in the first few lines, that it was just funny – at least by today’s standard.

As an example, here is the lead to a story from the June 24 front page of the Long Beach Press:

An event of supreme importance to Long Beach and Southern California, rivaling even that of the launching of the steel steamers General Hubbard and the Navajo at the Craig Yards, was the arrival in this city last evening in the inner harbor of the steamer Santa Barbara, in command of Captain F.B. Zaddart from Grays Harbor, loaded to a depth of 18 feet with a consignment of lumber for the Long Beach Improvement Co.

Seventy-four words in one sentence. That would send my old journalism teacher Buddy Davis spinning in his grave. And talk about backing into your lead – first the writer tells the reader at great length that this supremely important event has taken place, and then the reader has to wait until half-way through the lead to find out what actually happened, and even then he still doesn’t know why it was so important.

A modern writer would have said:

The steamer Santa Barbara entered the harbor last night, in preparation for today’s official opening of the new Long Beach City Docks – an event that is expected to result in long-term community benefits.

Still not very exciting, but more to the point.

My second example is from the June 2, 1911 front page of the Daily Telegram. This reporter was trying to soften up his lead by putting in sound effects.

And the first sling load of lumber unloaded from a coastwise freighting vessel lay on the municipal docks. This was at about 10 o’clock this morning. The ship was the Iaqua from Eureka, Capt. Arthur Self. The cargo was 280,000 feet of redwood from Eureka for the Long Beach Improvement Co. On the fine new city docks, as the vessel slipped up alongside, were gathered a number of Long Beach citizens, including Mayor C.H. Windham, who gave Captain Self a hearty handshake as the latter swung down upon the wharf. “Welcome to our city. You are bringing our first cargo,” said the mayor. Captain Self, who is a man of less than 30 summers, apparently, smiled, shook hands around, and then proceeded to get the unloading started.

The writer was trying harder to make it interesting. But written-down sound effects in a news story are more than a little corny – even for 1911.

Of course, it’s easy to make fun of these old-time reporters, running around, trying their best to describe the events of the day to readers who could not be at the event itself. But you have to hand it to those journalists from another age. They had no computers, no cell phones, no Internet to research their subjects, and little training in the art of clear and concise prose.

They did have something that a lot of my journalist and former journalist buddies don’t have. Job security. The newspaper industry was booming. Long Beach, which had a population of less than 20,000 people, had three daily newspapers. Back in 1911, everybody read newspapers. And there were plenty of jobs for people who wanted to write the stories.

And that’s part of history too.

George Cunningham and his wife, Carmela, are writing a history of the Port of Long Beach. It will be released in 2014. George’s new novel, Kaboom, is now available on Amazon.com and Barnes and Noble. You can contact George Cunningham at george@readerpublishing.com be his friend on Facebook at http://www.facebook.com/#!/george.cunningham.94695 and be his Tweetheart at http://twitter.com/#!/GeoCunham