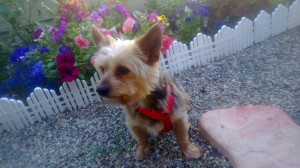 Boy, you think you know someone. Then they go and do something so out of character, so outrageous, so heinous, that it leaves you reeling.

For the last year, we’ve shared a little Yorkshire Terrier with my brother-in-law. He’s a 13-pound cutie, which is pretty big for a Yorkie, but a great size for a small dog. He’s big enough to take for a mile-long walk, but small enough to carry that last quarter-mile when he’s all tuckered out.

I never really wanted a dog, but Henry is such a sweetie, that I only had to babysit him for two days before wanting him full-time. And although my brother-in-law won’t give him up, he is willing to share.

So, the pup spends a few days here with Daddy George and Mommy and a few days “there” with Daddy Charlie. When he’s “there,” he goes by the name, Pup Daddy. To us, he’s Henry.

Henry is about as sweet as they come. He’s a cuddler. He’ll chase a ball and fetch his bone, but he’s always been more of a lover than a runner, and that’s pretty good for me. I wrap him in a blankie and cuddle him into my lap while I read or chat with folks or watch TV. He’s never been a barker, never chewed my shoes, and always comes when I call. He also offers that unconditional love that dogs seem to have a ready supply of, and

I figured that was why, when I got into a fight with the squirrel who kept attacking the flowers in my garden, Henry took my side.

I explained very carefully to Henry, that we would chase the squirrel out of our garden, giving the little guy a good enough scare that he’d stay away. That’s what we did, and all was well until a day later when Henry and I were on our 6 a.m. walk. He was sniffing around the bushes, and I didn’t think much of it until I heard this high-pitched screeching. I turned around to see the cutest Yorkie in the universe attacking the most panicked squirrel in the universe, and things were not going well for the squirrel. By the time I pulled Henry off, the squirrel – missing his jaw and most of his face – was barely moving. Henry, on the other hand, seemed quite pleased with himself.

I gave Henry a good talking to about the difference between scaring squirrels and murdering squirrels. But I don’t think it helped. In a word – Henry has acquired a powerful blood lust.

He no longer wants to go for a pleasant stroll, stopping now and again to pee 0n the trees or bark at the birds. Now he just wants to go out, chase squirrels and kill them. And he’s not particularly picky. If there are no squirrels around, he’ll go after the crows, possum, raccoons, and even other dogs. He’s started growling and barking at everything that moves, and the scene of the squirrel slaughter gets him straining at his leash and refusing to leave the area.

Walks are different now. He’s slipped his leash three times, and our outings have turned into a constant tug of war, with him dashing after any moving creature, rooting in the ivy, and barking up trees.

Frankly, I don’t know what to do. I’ve thought of giving him a talk like Sheriff Andy Taylor did when Opie carelessly killed a little mama bird, but frankly, I don’t think Henry gives a rat’s patootie about how sad the little squirrel’s family is. To be honest, I think Henry would like to kill the rest of the little squirrel’s family if he ever got the chance.

And that’s what I think about every time this furry little bundle jumps up on my lap and wants to take a snooze. Sure, he looks all cute and playful, but now when I look down, all I see is a killer.

And I’m pretty certain that if Henry has his way, I’ll soon need to change that to a “serial killer.”

AS WE GO TO PRESS:

Daddy Charlie – perhaps because he is also shocked about Henry’s killer nature – has agreed to a full adoption. One week after h is first kill, Sir Henry the Squirrel Slayer, has officially become a Cunningham

Carmela Cunningham and her husband George are writing a history of the Port of Long Beach. It is scheduled to be released in 2014. A graduate of UCLA with a degree in history, Carmela is also looking at a possible book on the contentious relationship between Venice and Constantinople that ended with the sacking of Constantinople in 1204. You can email her at carmela@readerpublishing.com