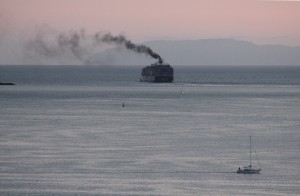 One of the challenges of the historian is to set aside the temptation to judge the people of the past by the standards of today. The world has changed and so have our attitudes.

Smoke winding into the sky from a factory in 1909 represented everybody working together to create a better world. Smoke billowing from the stack of a locomotive or a ship was a symbol of power and of man’s conquest over the tyranny of geography and the vast distances that separated people. A power plant turning coal into electricity was the bringing of light to the darkness and of supplying power for a multitude of new and modern devices for both the home and workplace.

In 2013, we see things differently. In 2013, smoke no longer winds its way skyward or billows majestically from a stack. In 2013, pollution belches out of trucks and locomotives, poisons spew into the air from refineries and factories, and power plants spit greenhouse gases across the globe, killing polar bears and generating hurricanes.

People back in the old days weren’t necessarily wrong in their beliefs or the way they approached their world and we aren’t necessarily right. But the world has changed and so have our attitudes.

If truth be known, the people of 100 years in the future – people yet to be born – will look back at our beliefs and customs with the same mix of superiority, horror, and bemusement that we hold today toward the people of our past.

Let’s hope they give us a break.