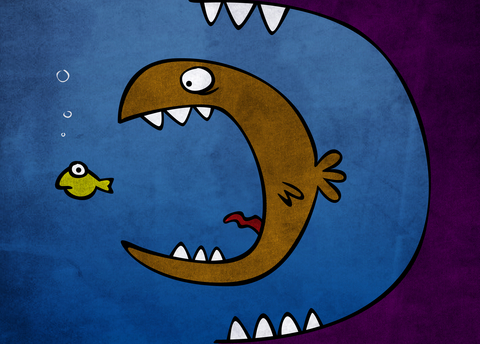 Even the most powerful leaders have to answer to someone, whether it’s his customers, the voters, or his own conscience. And even the most humble follower has somewhere within him a spark of rebellion that at some point says enough is enough. I am going to follow my own path.

Most of humanity is somewhere in the middle. They have a boss and they are a boss. The captain of the ship reports to an admiral. The doctor reports to his patient. The teacher reports to the principal.

If you live in a small town, you may rise to become one of the prominent and powerful people in town and change the lives of hundreds of people you see every day and still have time for other pursuits. If you live in a big city, you may rise to become a powerful and famous person and change the lives of thousands or even millions of people – most of whom you don’t know – but you end up devoting your life to that one pursuit.

Try to be a happy fish. The rest will take care of itself.

George and Carmela Cunningham are writing a history of the Port of Long Beach. You can order George’s new book, KABOOM, on Amazon.com. You can contact George at GEORGE@READERPUBLISHING.COM