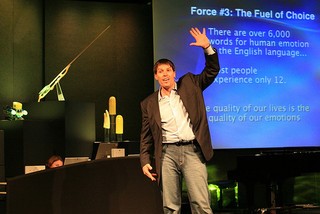 My feelings about them were less damning. The poor people who filled the collection plates got their money’s worth. They would leave the service emotionally cleansed, their troubles put into perspective, and their faith renewed. And if the preacher didn’t live up to the same standards he espoused, well how many of us fall short in that department?

The secular motivational speakers of today aren’t all that different.

Over the years, I have attended my share of motivational talks as a working journalist, and one thing I quickly discovered was to leave my notebook in my pocket. When you take notes, you quickly find out that most motivational speakers don’t really say a darn thing of any substance. Their talks are heavy with glib platitudes and generic advice.

When it comes to motivational speaking, it’s clearly not what you say, it’s how you say it that matters. You move about the stage. You speak with authority and certitude. You tell the audience to make lemonade out of lemons and when the going gets tough, they should be tough right back. And people – many of them sophisticated urban folks – leave those talks all fired up, ready to go out, build wealth, and chart a new course in life.

Like the poor Southern folks of my youth, they got their money’s worth

When others try to write about it, or even tell their friends about it – their account almost always falls flat. It’s like going to the opera and trying to put the experience into words.

It’s one of those things you just have to be there to understand.