There’s this wild rumor that the word “history” is sexist because it really only tells our story from a man’s point of view. You know – his story. That’s rubbish.

I’ve been a student of history since I was 9 years old, and the most compelling characters were always the wom 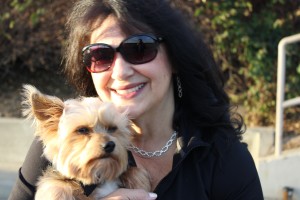 Real or made up, these women inspired me. They inspired me to look for my moment and to seize it when I found it. They inspired me to stand up to danger, to fight for my family, to honor my husband, to know what is right and always to choose it, to know myself, understand my enemy, and to never shrink back from the fight.

At least that’s the way I felt when I read about them as a child. And while I’ve never actually been that brave or righteous, I’ve managed at least to spend most of my life outside of my comfort zone.

When I was 26 and not too sure what a fuselage was, I started a career in public relations at Rockwell’s B-1 Bomber Division. Six years later, I quit Rockwell and went back to school for a history degree. As I studied 2nd century Rome and 10th century Persia by day, I edited books on change management and wrote a book on technology for disabled people at night. In 1995, my husband George and I started a newsletter about trade and transportation. The Cunningham Report was a weekly publication and started as a faxed document. After a few years, we changed it to email delivery and added a website. We produced The Cunningham Report for fifteen years before we closed it in 2010 to do other things. The fact that people still ask us if we’ll re-launch The Cunningham Report is gratifying.

At the same time that we were publishing The Cunningham Report, I continued to research and write about technologies for people with disabilities. The fact is that I was out of my element in the technology world, but no one noticed, and I then found myself as chief operations officer of UCLA’s Institute for Digital Research and Education and Director of Strategic Programs and Operations at UCLA’s Office of Information Technology.

I’ve had the great good fortune of having spent my career surrounded by techies. Brilliant techies.

I left UCLA in 2014 and George and I spent the next two years working on “Port Town,” a 500-page history of the port of Long Beach. When we finished the book, we gave away most of our things, stored the rest and took to the road, traveling the country for the next year with our 13-pound Yorkie, Henry. In early 2016, we established a home base in Sun Lakes Country Club Estates in Banning, California. It’s a good place to light when we’re not wandering.

I’m currently working on a book of essays with George and planning a history for my next writing project. With all the strong women I’ve read about, I’m thinking my first history will be about a wild old man – Enrico Dandolo, the forty-first doge of Venice.

My role models are still coming from books. I love old mysteries mainly because they’re more gentle than the current variety. I’m talking Miss Marple, Mrs. Fletcher and Ms. Raisin. You know the type—middle-aged and older women who bake and write and travel and knit, and oh yes, just happen to catch murderers every now and again through their heightened observation, rapier-sharp reasoning, and general nosiness about what everyone else is doing.

It strikes me oddly, but people keep asking me when I’m going to REALLY retire. Quite likely never. However, I do have this idea that someday I’ll live in the Scottish Highlands with George and Henry, a garden full of flowers, an oven full of scones, and a good history-based mystery half-way written on my computer.

Of course, I’ll solve a murder every now and again.

You can reach me at:  carmela@readerpublishing.com