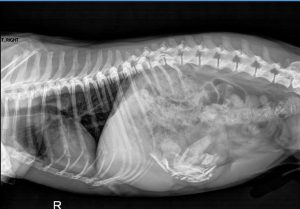 My husband George and our pup Henry have been planning my Mother’s Day celebration for weeks. And being the guys they are, they couldn’t keep it secret. We were going to garden all day and then get me a scoop of chocolate chip cookie dough ice cream in a pointy cone that night. It’s my very most favorite way to celebrate any holiday, and I was looking forward to it.

But Mother’s Day didn’t turn out that way out all.

We had a BBQ for a bunch of old friends and their children on Saturday, and the menu included, among a other things, pork ribs and corn on the cob. I had put a little trash can outside for people to dump their trash after they ate, and around 5:30 that evening, I went by and noticed the trash was knocked over. I picked it up, but didn’t think much more of it, until around 10 o’clock that night. That’s when Henry started retching, vomiting, and pooping. By 5:30 in the morning, I could see corn coming out of both ends of him and realized that he had dumped the trash and helped himself.

We rushed him to the emergency hospital where x-rays showed that Henry actually had consumed a full meal of corn and ribs. His belly was full of cob and bones. We spent Mother’s Day and night with Henry in the emergency hospital. There was talk of major surgery. Mom cried. Hard. We decided to wait and see.

Monday we took Henry home and followed with daily vet visits and x-rays for the next four days. I spent those days and sleepless nights holding Henry on my lap, giving him bits of food, and trying to get him to walk. Finally, the bones started showing up in his poop.

As I gloved up and felt through his “product,” I became overjoyed with each little bone shard and each little bit of cob. Finally, by Thursday, the x-ray looked “clear.” It wasn’t, of course. That night the little weasel managed to upchuck two of the biggest pieces of pork rib I’ve ever seen.

And then we were clear. 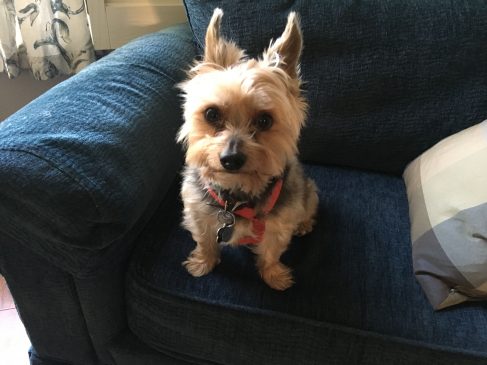 The total cost of Henry’s sneak-eating adventure was just over $1,000, but I don’t care.

It was a hard few days, but the most interesting part was what people had to say when I told them about Henry.

“My friend’s dog died from eating pork bones,” one friend said. “He was about four times as big as Henry. His owner would toss rib bones into the air, and Ripper would grab them, chew a few times and swallow. One day one got lodged in his throat, and Ripper died.”

Then there was the story of the big dog who killed its little companion over a bone. The two had been together for six years when their owners went to Hawaii to get married. The dog sitter put the dogs in the backyard, where they got into a dispute over bone ownership. The little dog was the alpha and wouldn’t give up the bone. The big dog just wanted the bone. So he ripped the little guy to shreds. “That big dog missed his little friend so much after that,” my friend, the dog sitter told me, sadly shaking her head.

One woman told me about giving her Chihuahua beef bones to gnaw on, with no real problem except that it turned the dog’s poop white. “White poop,” she said, “can you believe that?”

Besides the horror stories pretty much everyone seems to have, there are the people who want to warn against potential danger. “If the bones go up, instead of down, said one, they could make their way into Henry’s lungs or get trapped in his heart. You don’t want that. That would kill him for sure.”

“Or,” she added, “if it does go the other direction, it could explode his colon.”

Several people talked intestines, punctures and unfortunate lodgings that might not turn up to kill Henry for months – or maybe even years.

And then there were the people who promised to say a little prayer for Henry’s good health, and all the people who called or texted every day, treating my worry and heartbreak like Henry was my child – which of course, he is. I appreciated them the most.

Today, we are thankfully, gleefully, blessedly on the other side of all that. Which means that it’s finally time to celebrate Mother’s Day. I believe there’s some chocolate chip cookie dough ice cream in a pointy cone with my name on it waiting down at Baskin-Robbins.

And even though it’s a week late, today may be my most favorite Mother’s Day celebration ever.