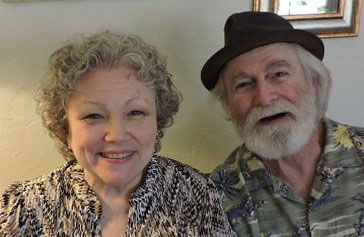 Nancy Hoffman has read thousands of children’s books over the years. Most she read when she was a little girl, but she didn’t stop reading them when she grew up. Nancy continued reading children’s books through college and throughout her life. As a Kindergarten and First Grade teacher, she read them to her students. Now she’s writing them too. It is just one of the reasons Nancy’s such a perfect match for her husband and writing partner Roger Hoffman. Roger’s both a writer and an artist whose colorful art spans pretty much every medium. His fanciful drawings are a perfect companion to the books the couple write.

Nancy and Roger’s most recent book is the first in a planned series called “The Saltwater Kids.” The first Saltwater Kids book is a middle-grade story that chronicles one summer in the life of Art and Minnie, 12-year-old twins living on a houseboat in Gulfport, Florida. “Summer of 2015” will soon be available at Amazon.com and Barnes & Noble.com. Nancy and Roger are currently working on the second Saltwater Kids book, “Casting Call.”

The team is also reaching out to a younger audience with a picture book called “Fourth Grader Parker Engels: Poetic Justice.” This story has a dual theme of how to handle bullying at school and learning to write haiku. It will also be available soon.

Nancy Hoffman has loved children’s books and poetry since she was a child. She memorized many of the poems from her book of poems by Robert Louis Stevenson, a book she still owns today.

In college, her children’s literature class was her favorite. Each week the professor, a short older woman who always wore long skirts and white tennis shoes, would fill the classroom with books by a chosen children’s author. It didn’t hurt that the professor also brought something to eat related to the author’s books. Gingerbread, for the Gingerbread man. Porridge for The Three Bears, and apples for Snow White.

A few years after college, Nancy wrote her first children’s book along with her husband Roger. She was hooked.

As Nancy and Roger continue working on children’s books, Nancy is also stepping out of her comfort zone. She has two more projects in the works – a book on minimalism, one of her passions, and a memoir on growing up Florida in the 1950s.

Roger Hoffman has tried just about every kind of art he could think of. From word working to sculpting paper mache’ figures, to drawing, he loves it all. For a time Roger enjoyed painting wall murals – everything from apple trees to adobe houses to jungles. He even takes his artistic abilities into the kitchen by designing and creating specialty birthday cakes for his family.

Born in Johnson City, Tennessee, he moved to St. Petersburg, Florida when he was still a boy. He was a photographer in the military and spent four years on active duty. When he left the military, Roger spent his career in civil engineering.

But from the time he was a child, Roger had the love of art and the desire to be creative. He is most at home as an author and an illustrator.

Branching out from illustrating to writing was easy for Roger. He enjoys collaborating with his wife Nancy on their middle-grade children’s books and on picture books. Roger is always looking forward to finishing one project so he can quickly jump into the next.

Roger’s always got his harmonica in his back pocket – just in case he finds a few minutes in the day when he’s not creating his art.