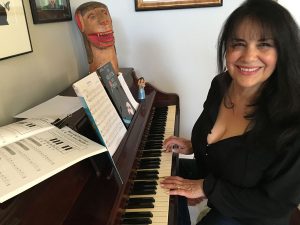 Today I picked up my mother’s piano.

It had been sitting at my brother-in-law’s house in the Arizona desert for the previous five years. Before that it had moved from one person’s house or storage shed to another since my mother died 18 years ago.

I grew up with that piano in the house although I never played it. I wanted to play it, but for one reason or another, I never had the opportunity to take lessons.

I dusted and polished that piano about a million times growing up. I sat and picked at it now and again, but I never learned to play. Now in retirement – that part of life where we get to do everything we always wanted to do but never had time for – I have decided to learn to play.

I’ve been told by a woman who has made her living playing pianos and organs and even writing compositions, that I’m too old to learn – that I’ll never play well. Williametta is a tiny, straight-forward old lady, who says what’s on her mind.

“Well, I really want to learn,” I told her. “My age means that I’ll practice more and think more about it.”

“That doesn’t matter” she said, “you’re too old to become very good.”

“I don’t really expect to be very good,” I said. “Maybe just a little good.”

“Nope. You’re too old. You needed to start playing when you were 4 or 5 years old. Maybe even younger.”

The conversation went on like that for several minutes, but how well I learn to play the piano doesn’t really matter.

I go into it expecting that it will be hard, and that with my natural lack of rhythm, it’ll be frustrating, and that I’ll never be very good at all. But, I want to make music, and so I made arrangements to get my mother’s piano from its last home and to begin taking lessons.

Here’s what I didn’t expect. When I picked up the piano, it was dusty and scratched and sadly out of tune. George and I took it for a wild ride through the desert, where it broke free of its straps, rolled half-way across the 15-foot U Haul rental truck in which it rode alone, and somehow managed not to hit the sides or fall over.

We got it home and into the house. The keyboard cover wouldn’t open without quite a lot of coaxing. But I coaxed, and it opened. Then I rubbed down the whole thing with orange oil and called a piano tuner.

And that’s when my mother’s piano suddenly became my piano. I saw this piece of furniture that I had grown up with as something more than wood and metal and ivory keys. I saw it as something living.

I don’t know how to play the piano on this day that I bring home my mother’s piano. And, just as Williametta predicts, I’m sure I’ll never be very good at it. But today, as I plunked those out-of-tune keys, I fell in love with the piano I grew up with.

And that’s when my mother moved back home with me.