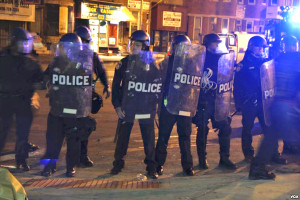 Now is the time to uncover the truth about what happened to Freddie Gray, to answer the questions raised, learn from the mistakes made, and take the necessary steps to address the issues.

Maybe then, the city will begin to heal.

George and Carmela Cunningham’s new book, Port Town, is due out in June.  Read about it here. You can order George’s novels, Kaboom and The Big Story, at amazoedn.com or by clicking the appropriate links in the right-hand column.