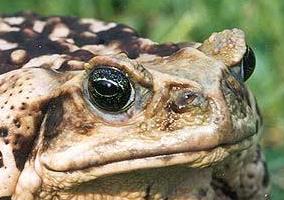 I am not a novice in a hunters’ world.  And I’ve been on frog hunts – I once  caught a bullfrog on a fish line baited with a piece of red yarn, although I’ve always felt a little bad about that – but I’ve never hunted toads. My guide, on the other hand, is well known in our home town of Canyon Lake, California, for his affinity for creatures that wriggle, slither, hop and creep.

“Do what I do,” he said, “and I will make you a number one toad hunter.”  This advice came from toad, turtle and snake expert, Vick Knight, during a recent visit to Maui by Vick, his wife Carolyn, my wife Dorothy and me.

Let me set the scene for our toad hunt.  We were on the walkway leading to the lawn and seawall area.  Low landscape lighting created a subdued glow among the flowers and illuminated the trunks of scattered coconut palms.  The gentle slap of the outgoing tide against the inner reef was the only sound.

“Stealth,” Vick hissed, “is critical from here on out.”  In a half crouch, he slid along the path, the beam of his flashlight probing the shrubbery.  Suddenly, he froze, rigid as a bird dog on point. There, captured in a tiny circle of light, squatted a bufo marinus, the infamous cane toad of Hawaii.  With flashlight and plastic bag in his right hand, the fingers of his left curled into the clawed appendage of a toad-catcher poised to strike.  Just then, a breeze rustled the bag.  Startled, the toad leapt away.  Without hesitation, Vick leapt after it and the race was on.  Into the shrubbery and along the wall they hopped, each straining for advantage.  The toad, in a frantic effort to escape, doubled back – this was a mistake.  The poised hand struck, and in one continuous motion, the hapless toad was snatched from among the flowers and deposited in the bag.  It was the finest example of toad-catching one could ever hope to witness.

I was fascinated with the dexterity and the sheer elegance of the capture.  The people in the darkness on a lanai on the second floor above the path were also interested.

“What are you guys doing down there,” inquired a feminine voice.

“Hunting bufo marinuses,” Vick replied.  “Would you like one?”

“Looks like you’re chasing frogs,” a slightly amused male voice interjected from the darkness.  “We don’t need a frog.”

“Watch out for snakes,” the feminine voice cautioned.

“No worries there, madam,” replied my guide, confidently. Vick Knight is the author of the bestseller, Snakes of Hawaii. The joke is, there aren’t any snakes on Hawaii, and the book is filled with blank pages.

Off we went, and in short order another bufo joined the first in the bag.  It was time for me to perform or quit the field.  The score was three to nothing by the time I spotted a toad in the grass.  Quietly, I crept closer, left hand curled into raptor’s talons.  Then I grabbed.

“I got him,” I cried, not having a clue whether or not the creature was a “him.”  Polite applause came from the darkened lanai above.  Soon, I had two more and the race was on.

Each time I grabbed a toad an admonition from my childhood flooded back. “Don’t play with toads – they give you warts!”  Old-wives tale, I thought, as I grasped each toad.  When the last one I captured piddled on my talons, the full impact of that warning loomed large.

When I was a kid, I experienced a wart or two on my hand.  Old Uncle Charley down the road gave me an antidote – cut a raw potato and rub the exposed flesh against the wart. Wait until dark and then bury the potato piece.  Wait a few days and the wart will disappear.  Those warts always did disappear – eventually – and I credited the potato.  Of course, now I know better.  Toads don’t give you warts – and you might as well just eat the potato.  Right?

Meantime, back on Maui, our sack contained a dozen or so bufos and it was time to release them.  Yes, this was a catch and release expedition – there was no intention to exploit the toads. The thrill of the hunt was all we were after.

We chose a spot on the spacious lawn softly illuminated by landscape lighting.  We would send our quarry back to the wilds from there.  The predatory fire that gleamed in the eyes of my guide during the hunt tempered into a benevolent glow as he tipped the bag, and its frantic contents hopped swiftly away to safety.  Approving applause floated down from an expanded audience watching from several darkened lanais above.

Thus ended the great Maui toad hunt. Boasting a sizeable catch, we are pleased to report that no animal was injured in this adventure. I am, however, keeping an eye on the fingers of my left hand in case something begins to grow there.

Ken Cable is a nature and travel writer.  His new novel “Track of the Hunter” about a 16-year-old forest service intern on the trail of a poacher is now available in both print and digital formats. “Track of the Hunter” and his first novel, “Lost!” about three young boys attempting to survive in the high Sierras during a spring storm can be ordered at www.readerpublishing.com.