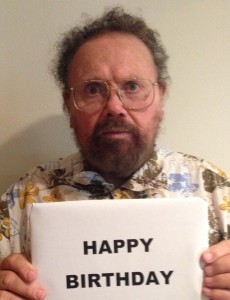 Other people are born on days that were of import when they were born and remain so every year. An example of that would be people who are born on Christmas Day. These folks always seem to feel a little cheated because they don’t get a separate celebration for their birthday. On the other hand, I have a sister-in-law who was born on Jan. 1, and she thought until she was 9 or 10 years old that the Rose Parade was a celebration of her birthday. Between you and me, I think she still harbors that thought.

My, how we love to lie to little children.

Then there are the people who are born on odd days, such as Feb. 29, which only comes around once every four years when it happens to be a leap year. They have to endure everybody making jokes about how when they turn 36, they are really only nine years old. Probably funny the first couple of hundred times they hear it.

Me, I was born on Thanksgiving. Yep, I was a Thursday child, but my birthday isn’t always on a Thursday. It’s just once in a while that my birthday intersects with Thanksgiving. This happens to be one of those years. You might think it would be a regular occurrence, like the folks born on Feb. 29, who get a birthday every four years.

By this time, you may be wondering, why in hell am I telling you all this. It’s so that you can wish me a Wonderful Thanksgiving AND a Happy Birthday, of course.