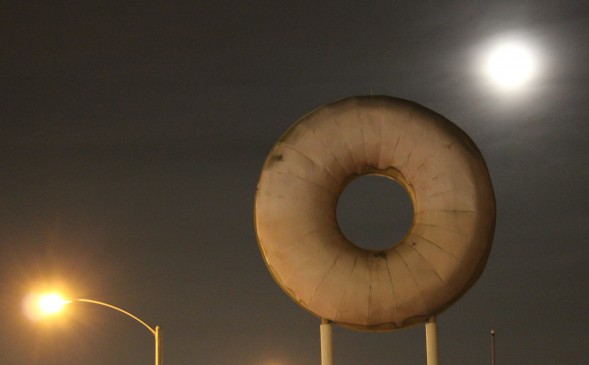 But I drive right past. I know that I could not go in and eat a doughnut, because if I did, I would want another one, and another, and another. Even if my stomach ached, I would want to have one more doughnut. So I am proud to say I have not had a doughnut in months, and I may never eat another doughnut in my life, because believe it or not, doughnuts are dangerous. They are worse than smoking cigarettes. Many smoker friends will go through a pack a day. Can you imagine eating 20 doughnuts a day? You would end up on the Dr. Phil Show after they cut a bigger doorway to get you out of your bedroom.

I hesitate to bring this up because I live in California. The folks we elect to represent us in Sacramento love nothing better than to pass new laws, especially laws that tell the rest of us how to conduct ourselves, all for our own good, of course. They would love to pass laws to ban the sale of doughnuts to children, make it a crime to eat a doughnut in front of your children, put a sin tax on all doughnuts, and make doughnut shops post warning signs about the dangers of their products.

What I really want to talk about is this giant pink doughnut in the sky near where I live. This doughnut is mounted on twin steel poles at Seventh Street, near Cal State Long Beach. It’s not a pretty sight, but that’s OK. Over the years I have probably driven by the big doughnut hundreds of times, and I am used to it. I even find it kind of friendly.

But, it’s not a historic monument. In fact, if you were to open a new business in town, and you decided that you would like to have somebody build a giant pink doughnut that you would mount on top of twin steel poles by the street to draw customers, people in the neighborhood would be protesting and asking City Hall to stop you from erecting such a donut. On the other hand, if you wanted to open a new business in town and in front of your business there already existed a giant pink doughnut on twin steel poles that you planned to take down, guess what would happen?

Well, you don’t have to guess. A Dunkin’ Donuts franchisee wants to tear down the old doughnut shop at the site and build a new 1,889-square-foot Dunkin’ Donuts store with a drive-through lane at the site. And as long as they were tearing down the old stuff, they planned to do the same thing to the giant pink doughnut in the sky.

So what happened? Another no brainer. People in the neighborhood protested such an outrage and asked City Hall to make Dunkin’ Donuts keep the big doughnut. Apparently there is some magic point in time when something everybody would be mad about putting up, suddenly becomes something everybody is mad about taking down.

Here’s where I take issue with some historical preservationists. We all want to keep around physical reminders of things that connect us to the past. But we have to be careful what we choose. Some things are indeed historic. Others are just old.

You may cherish the dress you wore at your wedding, although you are never going to wear it again. You don’t cherish the parking ticket you got a few days later. That is the difference between historic and historical. As the late William Safire once said, “Any past event is historical, but only the most memorable ones are historic.”

The giant pink doughnut in the sky is not historic. Now, I don’t want to be a cynic, but here’s what I bet happened. Some smart marketing guy started thinking, how are we going to get people to come to our new doughnut shop in Long Beach. How do we get people to perk up and take notice that we have a new store and this is the place they drop in for coffee and doughnuts?

I know. We will announce we are going to take down the giant pink doughnut in the sky, and then when people get upset, we will relent and promise to leave it there. And that’s exactly what the company has done. They have decided that since everybody loves the giant pink doughnut in the sky, they are going to leave it, standing tall, in front of their new shop.

“We don’t want to be viewed as the guys who killed the doughnut,” declared executive Don Almquist. Of course they don’t, and we should be all grateful.

Even though I wouldn’t have been that upset if they had taken the down the doughnut, I find myself being glad that they didn’t. As I pointed out earlier, I love doughnuts, and the big pink doughnut in the sky is a friendly doughnut. And I think I do like having it around.

But I am putting Dunkin’ Donuts on notice. No matter how much I like their sign, no matter how much the doughnuts and apple fritters and bear claws inside call to me as I drive past, I’m not coming in. Especially not if my wife is in the car.

I don’t need that kind of trouble.