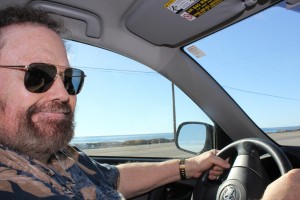 Third, I was curious about what the experience would be like. It’s been a while since I had been to the DMV – let’s face it, it’s a place where nobody goes if they can avoid it – so I wanted to see how things have changed.

The good news is that things went more smoothly than I anticipated. It only took a little more than an hour to be signed in, processed, thumb-printed, called upon, biometrically checked out, photographed, and tested. That’s a huge improvement over last time I went. The DMV folks were for the most part polite, although too busy for idle chit-chat. As a taxpayer, I think that’s good. I don’t want them chit-chatting on my dime. They checked my right thumb when I came in, and then rechecked it later in the process; I suppose to make sure I didn’t bring in a ringer to take my test.

The test, as anticipated, had little to do with safe driving. I did practice for it. I downloaded all five sample tests on the DMV website and had my wife drill me over breakfast. Twice. But the actual 18-question multiple-choice test I got at the DMV had not one of the same questions as on the DMV sample test. And if you miss more than three questions, you fail.

One question, for example, was how tall a child has to be before he is no longer required to sit in a child safety seat. When I got my license kids used to ride around in the back of pickup trucks and sit on their mom’s laps. In other words, I had no idea. I closed my eyes and picked one, and I was incorrect.

Another dealt with what alcohol in your blood level you needed to be considered legally drunk. That may be an interesting question, but it has absolutely nothing to do with safe driving. Nobody goes around testing their blood before they get in the car to drive. The correct answer should be this: If you think there is any chance at all that you are too drunk to drive, you probably are, so don’t do it.

The truth is that I am like most people. Most people drive safely because they know what safe feels like, not because there’s a rule. Like most people, I sometime speed. I also sometimes go at less than the speed limit if there are circumstances – such as wet and slippery roads – that call for reduced speed.

I think I would like to meet the people who made up the test. I don’t know who they are, but I can almost guarantee you that they are members of a committee and that most of them have masters’ degrees. They sit around and pontificate and come up with a nonsense set of questions that are supposedly going to weed out bad drivers.

Overall, my trip to the DMV was much less onerous than I had imagined, which is a good thing. And the good news is that at the end of the process I was awarded a temporary driver license that I can show the police if I am pulled over for any offense, whether it was on the test or not.

The bad news is that they are going to mail me my permanent driver license in the next few weeks. The DMV and the Post Office working jointly on a project?

My fingers are crossed.