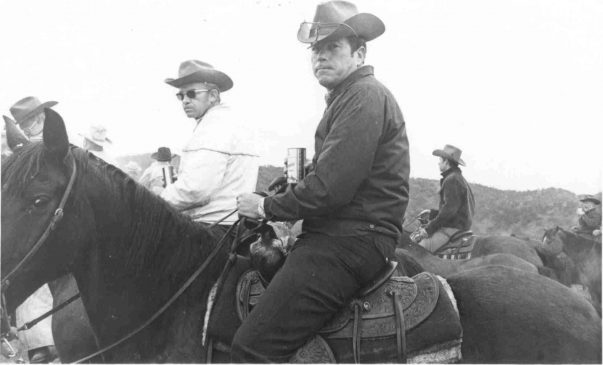 Ken Cable knows about horses. He also knows what it takes for young boys to become men. And when he writes about both, it’s entertaining and motivational. The author has written three books aimed at young people, but they’re also a great nostalgic read for adults. LOST! Track of the Hunter and White Shadow are available at: www.amazon.com.

It was only 9 o’clock in the morning, but it was already hot. The locomotive hissed slowly along the spur, then squealed to a stop in a rush of steam as the third stock car drew even with the horse auction corrals.

Sixteen-year-old Jeff Martin was standing near the rail spur in the shade of a straggly sycamore tree.  He could hear the horses in the rail car stamping their feet and whinnying in fright. A four-man crew emerged from the stockyard dragging portable fencing into place next to the boxcar. When a train crewman slid open the freight door, the horses surged out of the car, jumping to the ground and milling around in the makeshift pen next to the horse auction pavilion.

After the last horse was unloaded, three crewmen from the train climbed into the car and dragged a downed pony to the door and dropped him out on to the ground where he lay like a white shadow at the feet of his milling cousins. Wranglers came and herded the horses into the auction corrals.

Sometime later they came back and hauled away the temporary fences leaving the fallen pony lying on the ground. Small dust devils pushing up from his nostrils as he lay in the dirt told Jeff the pony was still alive.

At 16, Jeff was big for his age, strong and agile – a standout on his high school basketball team. His grades were average except for an elective he was taking in animal husbandry where he excelled. Horses were his passion. He never had one, but it was his dream to someday own a ranch and raise horses.

When he was 12 years old, Jeff had started spending his weekends hanging around the River Front Riding Stables down by the Rio Hondo River. Two years later, he was hired by the stable owner to feed, groom and saddle twenty rental horses each Saturday and Sunday morning during the summer. His weekend workdays started at 5:30 a.m. when he and two other hands mucked out stalls in the barn.

The owner kept three horses out of the rental pool for his own use and for his wranglers. Jeff picked one of these horses and rode out on the river-bottom trails each weekend to keep track of the riders and prevent abuse of the rented animals. With summer coming on and the kids out of school, riders would keep the rental horses busy all day.

Just a few miles upriver from where the Martins lived, a thin strip of county land near the small town of Vernon was home to a large horse and mule auction that was held each Saturday. Jeff was about 12 years old when his dad first let him walk with his friends to watch the stock handlers parade dozens of horses and mules through the sales ring. The animals came to the auction from local stables and from ranches all over the Southwest.

The auctioneer’s rapid cadence lent an air of excitement to the auction. On special sale days, buyers sat in the stands lifting their paddles or touching the brims of their western hats to signal their bids. When no more paddles were raised, or hat brims touched, the auctioneer would shout, “Sold to…” and name the buyer or the ranch that had bought the animal. That horse or mule would be driven out of the ring and a new one with a number pasted to its rump would be run in. One of the stock boys would touch the animal with a long buggy whip to make it trot around the ring as the auctioneer called for bids in his sing-song patter. The auction was always an exciting event for Jeff, and it seemed a good place for him to be on this lonely day.

As the young man watched the stock being unloaded, he was startled when he saw the white pony dropped to the ground by the stock handlers.

Jeff’s determination to save the pony came upon him suddenly. He quickly walked over and crouched by the inert animal. He could immediately see that its breathing was shallow and it was suffering from the heat. He had to get it out of the sun. He had no idea how to do that, but looking around he saw an abandoned eight-foot wooden gate leaning against the fence by the pavilion. Jeff dragged the gate next to the pony intending to somehow roll him onto it and pull the suffering animal into the shade of the tree near the rail spur.

The three crewmen who had pushed the pony out of the rail car were sitting in the door watching Jeff struggle with the gate. After a few minutes, and without a word, they jumped down from the car and walked over to the animal, grabbed its legs and tipped it onto the gate. One of the men walked back to the railcar, reached inside and brought out two lead ropes. They tied the ropes to the gate and started pulling the pony toward the shade of the Sycamore tree. Once under the tree, they rolled the pony off and set the gate aside. Jeff thanked them as they walked away.

“Good luck kid,” one of the men called back.

Track of the Hunter on Amazon