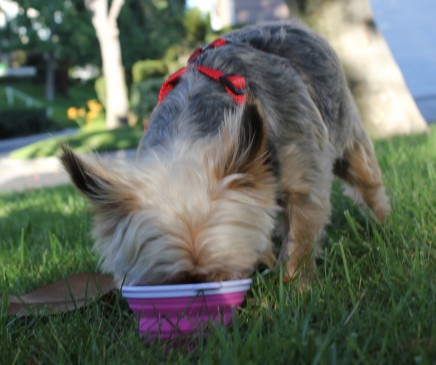 Others voiced the same concern. We are not sure what their problem is. Perhaps they think if their boy dog drinks from a pink cup, he will become gay.

We, on the other hand, think if a dog is gay, he was probably born that way. He probably won’t become gay by drinking from a pink cup. And even if Henry turned out to be gay, we are pretty sure we would feel the same way about him that we do now.

Our deal is this. We don’t get involved in Henry’s sex life, and we don’t want him involved in ours.

So we sent away for the cup, and it worked out really well. At the appropriate time during our walks, we pull out Henry’s cup, pop it open, and share some water from our bottle. He seems to like it fine, even though it did turn out to be pink.

The only real change we have seen so far is that Henry does not seem to be quite as thirsty when he gets home from his walk. To be fair, we have noticed that our sweet little boy does seem to enjoy show tunes. But we are pretty sure he liked them even before he got his pink cup.