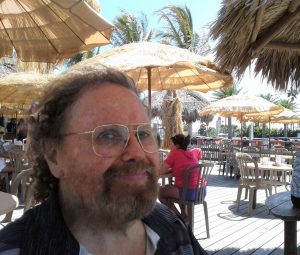 George Cunningham comes from a long line of story tellers and prevaricators. Sitting around the living room on Sunday nights, drinking Coca Cola out of the bottle, listening to his grandfather pass down stories to his sons and their families, hearing his father and uncles tell their own stories, each one trying to top the other, and learning as a kid how to take the humor and bitter-sweet tragedy of life and weave it into a good tale.

George grew up on the West Coast of Florida, where he spent many happy hours dipping his toes into the warm waters of Tampa Bay and the Gulf of Mexico. He was a late bloomer who didn’t graduate from University of Florida until he was 29. As a young man, he worked as a survey crew chief, a civil engineering aide, a short-order cook, a painter, a laborer, a construction inspector, a gardener and a seltzer bottle washer. After graduation he worked as an editor, a copy editor, a layout man, a columnist, a police reporter, a business reporter, and a feature writer. He served three years in the U.S. Army, including a year in Vietnam with the 173rd Airborne Brigade.

George came to California in 1969 and immediately fell in love with the state. He worked at the South Bay Daily Breeze, City News Service, the Orange County Register, and the Long Beach Press-Telegram.

He is the former editor and publisher of The Cunningham Report, an electronic newsletter on West Coast ports that he and his wife Carmela founded in 1995 and ran for 15 years before closing operations in December 2010. They have now founded a new venture, Reader Publishing Group, which will represent and publish books by a select group of authors, including themselves.

George is a writer because he has to be. There are new stories to tell, new ways to tell them and new people to tell them too. He plans to write until he dies.

He has published two novels – The Big Story and Kaboom.

The Big Story, set in the early 1970s, is about a reporter who is chasing a story that the police, the mob, and his own editors want to kill. Kaboom is a darkly humorous look at the quirky community of Lawnville and the ripples that extend throughout that community following a brutal murder. Both The Big Story (link to Big Story page) and Kaboom (link to Kaboom page) are available in printed and digital form.

George and his wife Carmela have also co-authored a book on the history of the Port of Long Beach, titled Port Town. It is available on in both printed and digital form on Amazon.com.

You can reach George at George@readerpublishing.com

And you can find him on Twitter at http://twitter.com/geocunham