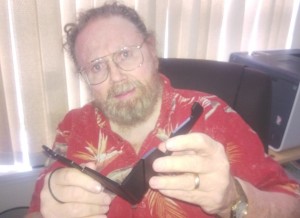 That’s the first rule of personal procurement, and I broke it. I knew when I saw the book stand in the store that it was a cheap little piece of junk, but I was in a hurry, and I was in a good mood, and I thought what the heck, and all those other things you tell yourself after you buy something stupid.

I am aware that the people at Moleskine have to make a living too and if they can do it by selling an incredibly cheap piece of plastic for an incredibly high price to fools like me, well more power to them. I hold no malice.

The fact that I got it home and had to practically use a hacksaw to pry it out of its molded plastic packaging, only to discover that it doesn’t really work unless the book you want to prop up on a desk is a small paperback novel – well that did irritate me.

But what really fried my grits was the fact that after selling me something so obviously inferior at such an inflated price, the company goons couldn’t resist mocking me for my purchase. Included with the cheap piece of plastic was a 1-inch-by 2½ inch paper foldout explaining what I just purchased in eight different languages.

And here is what it said:

Moleskine® is a brand that encompasses a family of nomadic objects: Notebooks, diaries, bags, writing instruments, and reading accessories, all dedicated to our mobile identity. Flexible and brilliantly simple tools for use both in everyday and extraordinary circumstances, ultimately becoming an integral part of one’s personality.

Really? I may have been stupid enough to buy their $17.95 piece of folding plastic, but do they really think I am incapable of recognizing sarcasm when I see it? What did they think my reaction was going to be?

Oh gee, I didn’t realize my expensive, doesn’t-work, crummy little plastic book stand was part of a family of nomadic objects. Where can I buy the rest of the family? I really didn’t understand that my book stand could be used in both everyday AND extraordinary circumstances. I suppose if I were incarcerated in one of the many fine, but overcrowded penal institutions in the state of California, I could whittle it down into a shiv to protect myself from Bubba and his boys. That would be extraordinary. My gosh, I do believe my doesn’t-work, nomadic bookstand is already becoming an integral part of my personality!

If I have learned nothing else in life, I do understand that sarcasm is a two-way street. And sometimes, when the you-know-what is raining down upon your head, it’s the only defense.

My wife taught me that, and God bless her for it.